Observers of Belarusian politics have lately noticed increased activism of a political party that is traditionally labelled as pro-governmental. The leader of the Liberal Democratic Party Siarhey Haidukevich and his son and also deputy Aleh Haidukevich have recently featured a lot in the media. For many this again raised the question about the role and status of pro-governmental parties in the Belarusian political system.

The analysis of such parties reveals a number of interesting facts. Firstly, the majority of them exist only on paper. Secondly, those few active parties look very different. Not only are their official ideological backgrounds different but they also seem to play different roles.

When changes start to take root in Belarus those parties might quickly find themselves in competing political camps.

Overview of the Belarusian Party System

Belarus has 15 officially registered political parties. A number of parties work without an official status. The most noticeable of these is the Belarusian Christian Democrats (BCD). In spite of several attempts by the BCD and others, no new political party has been registered since 2000. The last one to secure registration was the oppositional Conservative and Christian Party – BPF.

Under these circumstances some organisations do not even try to become parties even though they obviously have political ambitions: for example, the For Freedom Movement and the non-registered Tell the Truth campaign.

Talking about the membership of the parties is a bit problematic. Officially, the Liberal Democratic Party has the biggest number of members – about 45,000. However, how many of them actually contribute to the life of the party and how many can be mobilised for any activities remains unclear. The same problem is characteristic of the other parties: their official membership significantly exceeds their real potential.

Observers normally divide the parties in Belarus into two blocks: pro-governmental and oppositional. The table below demonstrates the division. 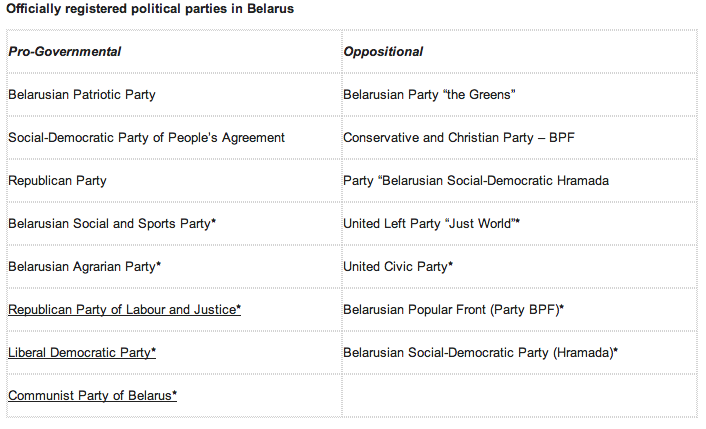 *Political parties that were active in the 2012 parliamentary campaign, according to the OSCE/ODIHR reports.

The three underlined parties in the pro-governmental column present the most interesting cases. They are:

Unlike the majority of the “paper parties” in the loyal camp, these three stay active in their day-to-day lives. Moreover, being in the same pro-governmental category they are nonetheless very different: from the point of view of their ideologies, positioning strategies and potential for changing the political side.

The Communist Party of Belarus (CPB)

The CPB presents the simplest analytical case. It is the most loyal supporter of President Lukashenka’s policies. Unsurprisingly, it has always had representation in the Parliament, which in the Belarusian political system is an appointed rather than elected body.

Following the elections of 23 September 2012 it now has 3 MPs in the House of Representatives – the lower chamber of the Parliament. This looks huge by the existing Belarusian standards: the overall number of party-affiliated MPs in the current convocation of the parliament is only 5.

The CPB positions itself as the only decent successor of the Communist Party of the Soviet Union and, therefore, promotes the typical communist propaganda of those days. It harshly criticises private property and the market economy, demonises the West and praises the might of Belarus’s union with Russia.

However, as one of the staunchest supporters of the incumbent the CPB can hardly be considered as a pure ideological party. Alexander Lukashenka always acts out of pragmatic interest rather thanideological values.

Therefore, a more correct definition for the CPB would be a pocket party behind the brand of Soviet-era communism. Its role in the political system is to create an image of the successive nature of Lukashenka’s regime, which the old generation appreciates. But the CPB will not survive as an influential political force without the administrative backing of the regime.

The Republican Party of Labour and Justice (RPLJ)

With the RPLJ, things gets more complicated.

On the one hand, this party only rarely features in the media and generally keeps a low profile. An ordinary citizen will hardly recognise its name. On the other hand, the RPLJ managed to mobilise the second largest number of observers among the political parties in the latest parliamentary election (after the CPB).

The party’s stance towards the government is also contradictory. While it never publicly criticises the authorities, in private conversations and talks with foreign partners the leaders of the party speak quite negatively of the regime. They say that the government’s policies will finally lead to a social and economic tragedy in the country.

Interestingly, after the latest election the RPLJ got one mandate in the parliament. According to the party’s chairman, Vasil Zadniaprany, the authorities had to react to the RPLJ’s growing influence in the regions by providing it with a seat. But this explanation sounds unconvincing. The Belarusian authorities normally react to someone’s increasing popularity and power by repression, not support. So a different version looks more realistic.

The leader of another pro-governmental party stated in an interview with the author that the RPLJ was created in the mid-1990s by the Security Council of Belarus as an instrument to control the centre-left political segment. As a social-democratic party the RPLJ really suited such a role. But after Lukashenka’s regime became consolidated at the beginning of the 2000s it no longer needed the RPLJ and the party appeared on the margins of the political life.

It is unclear why the regime decided to grant the RPLJ a parliamentary seat this time. Possibly, it was a part of the game with the West: to create at least some impression of the existence of a loyal opposition.

Generally, it seems that, unlike the CPB, the RPLJ will be quite prone to becoming a government opponent as soon as some political liberalisation begins.

The LDP presents the most interesting case among all the parties. Its motivation, activities and sources of financing have always caused numerous speculations.

In many respects it looks like a clone of the Liberal Democratic Party of Russia that is chaired by Vladimir Zhyrinovsky. They both only remotely resemble classical liberal democratic parties. Their ideologies are vague and political decisions are often made on a case-by-case basis. Moreover, they both have charismatic leaders whom many see more like showmen rather than serious politicians.

The LDP has been quite critical of the government. In 2001 and 2006 its leader Siarhey Haidukevich even competed with Lukashenka for the presidency (many considered him as a sparring partner, though). The party obviously tried to project an image of constructive opposition.

However, the LDP always supported the regime on critical issues. For example, in 2004 the party’s leader made a public statement in favour of lifting the two terms presidential limit for Lukashenka. And in 2012 the LDP actively joined the authorities in their anti-boycott campaign.

In recent months the party has become particularly active. Its leaders regularly appear in the media, both government-owned and independent. According to their statements, the LDP has started preparations for the 2015 presidential race in which Mr Haidukevich stands unprecedented chances of winning. The latter seems doubtful. But it is clear that the LDP will become increasingly oppositional as the government’s grip on power lessens.

Thus, today the pro-government parties quietly act within the limits that the government allows them to. Apart from the LDP, they mostly stay unnoticed by the general public. But depending on what happens in Belarus, we can expect differing strategies from different political parties not only in the opposition but also in the pro-governmental camp.

Some of them will continue to perform their current roles of loyal supporters or critics while others will move to the other side of the political spectrum. We might all see completely new parties with the same old names. And this will be an exciting show.